A Day in King George Sound

In the early 1600s, Dutch seafarer François Thijssen set sail from the Cape of Good Hope on his vessel The Golden Seahorse for what is now Jakarta, Indonesia. He missed, by quite a long way: more than 3000 kilometres. On the 26th of January 1627, he came across Australia somewhere near Cape Leeuwin. His charts for the southern coast of what he called ‘New Holland’ show a bay and islands that were most probably Albany. It wasn’t until 162 years later, though, that Captain George Vancouver, aboard the Discovery, sailed past Michaelmas and Breaksea Islands and named King George the Third’s Sound. Vancouver stayed 15 days, explored inland, made contact with the Minang Noongars, and planted watercress, vines, almonds, oranges, lemons and pumpkins.

Several seafarers dropped anchor in this harbor over the next quarter century, and their names ring through the years every time a local landmark is mentioned: Bruni d’Entrecasteaux (aboard L’Esperance), Matthew Flinders, Nicolas Baudin and Phillip Parker King. However, it wasn’t until 1826 that the British Secretary of State for War and the Colonies, under growing concern that the area might be annexed by France, instructed the Governor of New South Wales to establish a suitable settlement in King George Sound. Major Edmund Lockyer, aboard the brig Amity, with twenty soldiers, twenty-six convicts and six months’ provisions, arrived on Christmas Day in 1826. They planted the Union Jack, fired their muskets in the air and claimed the whole of New Holland for Britain.

Our trail today takes us to this first European settlement in Western Australia. Initially named Frederick Town while it was under the control of the colony of New South Wales, it was renamed Albany by Lieutenant Governor Stirling of the new Swan River Colony in 1832. But before we go all the way to the coast, a perfect place to stretch your legs after 80 minutes in the car, is the town of Mt Barker. The town centre is small enough to walk around in less than an hour, and you’ll see some magnificent examples of buildings from the Federation era, including the imposing Plantagenet Hotel. Just to the north of town, on your way in, you can walk around the original police barracks, which have been preserved as a museum by the Plantagenet History Society.

On the drive down, you would have noticed two mountain ranges. First the Stirlings, and then, 40 kilometres further south, the Porongurups. While close neighbours, the two ranges are vastly different in age, geology and ecology. Each is unique in its way, among the most biodiverse regions in the world, and deserving of a day’s exploration in their own right. Mt Barker sits just on the western end of the Porongurups, and you’ll notice the road climbs a few steep ridges north of the town. At 300m above sea level, Mt Barker is the highest elevated town in the Great Southern, and regularly one of the coldest places in the State. If you take the Mt Barker Road south-west towards Denmark for 5 kilometres you’ll have a view from Mt Barker Hill at 400m. On a clear day, you’ll be able to see all the way to Albany, and back north as far as the Stirling Ranges – a great way to survey your day’s journey.

The drive into Albany, down York Street and along the waterfront will take you right through the historic heart of the town and where European settlement first started in Western Australia. Princess Royal Harbour, the Vancouver Peninsula, Point King and King George Sound will all sweep into view as Marine Drive skirts the southern slopes of Mt Clarence, and on to the National Anzac Centre.

Two of the turning points in Australian history involve Albany: the day Edmund Lockyer planted the Union Jack and united a whole continent under one flag, and the day that Australia, as a newly federated nation, came of age. Since the first of January 1901, when the Commonwealth of Australia was proclaimed, there hadn’t been a significant international event where Australians had participated as Australians. The First Australian Imperial Force and the New Zealand Expeditionary Force eventually became the Australian and New Zealand Army Corps. The fleet carrying this force was first assembled in Albany in October 1914. In early November and late December of that year, for each one of the 60,000 troops that sailed, this was the last view they saw of Australia. One in six of those men never saw home again.

The National Anzac Centre is a place to contemplate selflessness, courage and sacrifice; to reflect on the idea of a national character and spirit. The way that this museum personalizes the Anzac story and immerses you in the life of a soldier in World War I, while combining artefacts from the time with modern sculpture, all against the backdrop of the entry to the harbour and that last long look that the Anzacs had of home. It can’t fail to move. Before you leave the area, take the short drive to the top of Mt Clarence. From here you’ll have views over Princess Royal Harbour to the Torndirrup National Park, Flinders Peninsula and your next destination, The Gap. The Anzac Desert Mounted Corps memorial on Mt Clarence was where Padre White started the Australian tradition of the ANZAC dawn service, on the 25th of April 1930. 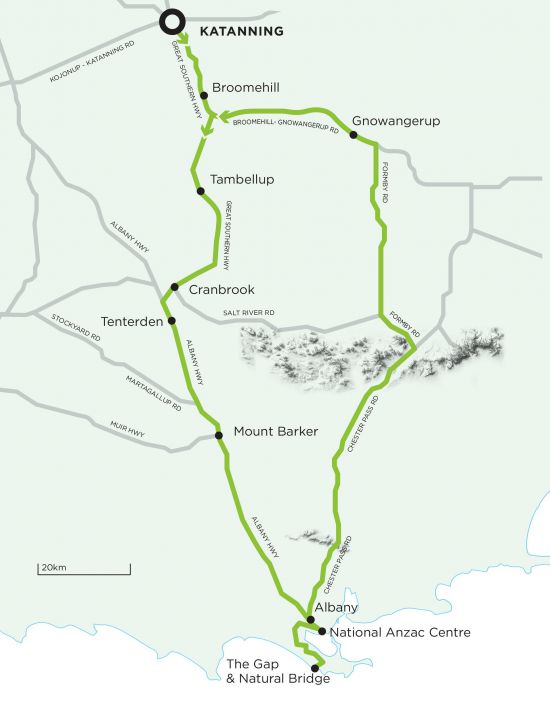 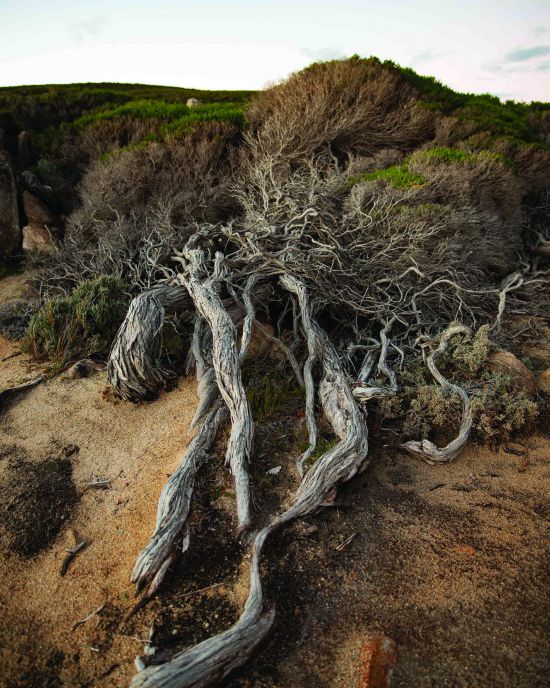 As you pass back through the town of Albany you’ll find plenty of options for a quick snack or lunch; then on Frenchman Bay Road, which rings the harbour, you’ll have views back towards the town and its two hills, Mt Melville and Mt Clarence.

The Gap, Natural Bridge and Blowholes are all part of the Torndirrup National Park. They are the result of 1600 million-year-old chunks of granite being carved by the Southern Ocean. Australia and Antarctica were once a supercontinent called Gondwana and it was here that they separated. There aren’t many places in the world where you can witness nature’s raw power up close, and even on a day with mild swell, you can often feel the waves slamming into the rocks 40 metres below, through the soles of your feet. A handful of people have lost their lives here though, along with the many who have been swept from the rocks on this coast. If you don’t wish to be one of them then use the well-designed viewing platforms and stay on the paths. Watch the ocean for half an hour or so and you’ll see the occasional wave come through that is two or three times the size of the others, and it’s this wave that the foolhardy don’t anticipate.

Then, as you wind your way back home, you no doubt realise that you’ve had just a taste of what Albany has to offer. In only one day you’ve witnessed landscape on an epic scale, stood in places where the story of this nation was changed forever and witnessed the raw power of the ocean. If you’ve let the day grow long and you are heading back towards Katanning in the dark, slow down and enjoy the drive back up the Great Southern Highway. Or you might have chosen to enjoy some mountain scenery on the way home and return via Chester Pass Road and then Formby Road to Gnowangerup and across. Either way, stay safe. Kangaroos have yet to learn the rules of the road.