New settlers landing in Australia for the first time found a very strange land indeed: the trees shed their bark and not their leaves; the swans were black; it was warmer in the hills; some mammals laid eggs while others raised their young in pouches. Nostalgia for the home country could be strong, and so the Acclimatisation Society of Victoria was formed in 1861. Its purpose was to encourage the importing of animals because the local varieties seemed deficient, but also to make the place feel a little more like England. One of the society’s members was Thomas Austin, who introduced twelve rabbits to his estate in Victoria. ‘The introduction of a few rabbits could do little harm and might provide a touch of home, in addition to a spot of hunting,’ he said.

He was wrong about the harm. In less than a decade, the plague of rabbits had spread across Victoria and South Australia and into Western Australia, fundamentally altering the ecosystem as they went. They competed with similar-sized marsupials for food, destroyed perennial grasses, evicted burrowing animals from their underground homes, destroyed crops, and eroded pastures. In 1901, the Western Australian Government decided to fence off the whole State to protect its prized agricultural areas. It took six years, with work gangs of up to 400 men making posts from timber found along the way, digging a trench so that the distinctive hexagonal wire mesh could extend underground. The rabbit-proof fence was 1827 kilometres long when it was finished, and the longest fence in the world.

But they were too late. Colonies of rabbits were already inside the fence, so they built another one. Fence number two starts at Point Anne, just east of Bremer Bay, and runs through the eastern Wheatbelt to join fence number one near Cue.

This fence was finished in 1908 and is in good condition in many places. Our trail picks up the fence just over 23 kilometres east of Dumbleyung, on the road to Lake Grace. As you make the left turn to head north on Rabbit Proof Fence Road, look for the distinctive knee-high hexagonal mesh strung through rough-hewn fenceposts with a single strand of top wire. The markers you’ll occasionally see on the fence, and the names of some crossroads, like one-fourteen road and one-o-four gate road, refer to the gates in the original fence. Leave one of those open back in the day and it was 72 days in prison.

Rabbit Proof Fence Road runs through farmland and the occasional stand of salmon gum and white gum forest. 36 kilometres north, you’ll pass the small hamlet of Dudinin, established in 1915. Several of the original buildings in the town are still in good condition, including the general store and the butcher’s shop. The impressive stone church was built in the 1950s by volunteers, with bricks carted from a nearby farm. Another beautiful set of buildings is 15 kilometres further north-east, at Jitarning. The dance hall and hostel, originally built to welcome the influx of soldiers returning from the First World War, are faithfully preserved and easily visible from the road.

As we head east to Kulin now, you may have noticed the subtle change in the landscape. We are on the edge of the eastern and central wheatbelts now – areas that produce more than half the State’s wheat and wool, as well as lamb and mutton and some other agricultural exports that you might not expect, like yabbies.

We are heading towards the West Aussie outback, that hard to define zone that’s further out than the bush, not quite as far as the Never Never, but somewhere beyond the Black Stump. Any way you look at it, when you return to the Premier Mill Hotel tonight just tell everyone you’ve been out back, they’ll understand.

In Kulin, you’ll find an excellent visitors centre, a beautifully restored old pub, and the original Butler’s Garage, which has been converted into a museum. There is a collection of vintage cars, motorbikes and farm machinery here that date back to the beginnings of motorisation. There’s a 100-year-old chaff-cutter that still runs, Model A Fords, World War Two motorcycles, and tractors from every era. The museum serves as the local men’s shed gathering place, so if you are there when it’s open, on Wednesdays and Saturdays, you’ll meet some of the real characters of the region and hear some priceless stories. Outside those times, if you call ahead, you might get lucky and have a local show you around.

We now take the road east before turning south towards Lake Grace. But be prepared to drive this next section slowly. What started as a way of promoting the annual bush races held each October, has taken on a life of its own. The Tin Horse Highway has sculptures in almost every paddock on the side of the road: some are genuinely funny, some are bad-joke funny, and others are sublime works of art. But regardless of how you judge them, as you leave Kulin, you’ll know you’ve been in a town with a sense of humour. Pay attention, though: some of the best sculptures aren’t immediately obvious.

Fourteen kilometres out of town you can take a small diversion to Jilakin Rock. This is one of the granite domes in the region that, as they collected and held water, were crucial to the survival of the Noongar people as they walked their hunting grounds to the east. Just east of Katanning, near the golf course, is the easternmost stand of the South-West’s jarrah forests; except for the tiny stand of jarrah at Jilakin Rock, which ecologists believe may have been transported and planted there by the Noongar people. The short climb to the summit will yield a view of surrounding farmland, Jilakin Lake to the east, and the spread of lakes to the south. This area is also the site of the October bush races and the annual Blazing Swan festival, in April. 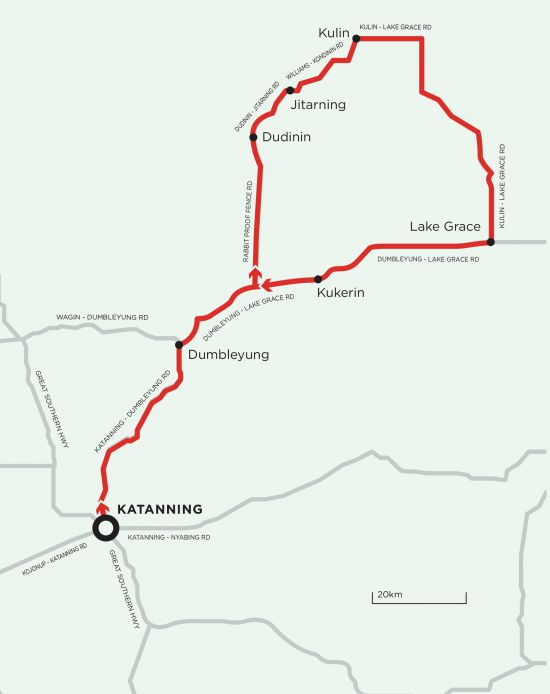 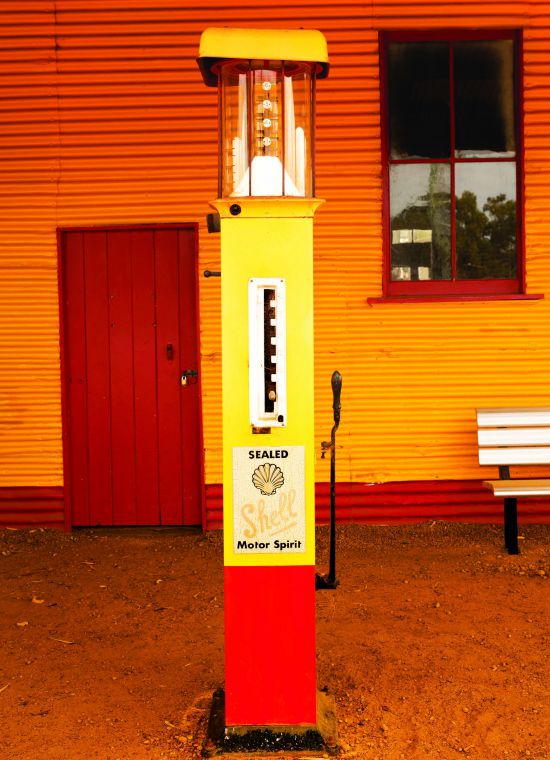 We continue south now, to the town of Lake Grace. Settled just before World War One, as the railway spread east from Kukerin, the town is the site of the Australian Inland Mission Hospital Museum. The museum is dedicated to the memory of the Reverend John Flynn, whose vision was to provide hospital and nursing facilities within one hundred miles of every spot in Australia where women and children reside. The Australian Inland Mission established fifteen homes and bush hospitals in Australia’s far-flung places, and Lake Grace still has its regional hospital to this day.

Now it’s time to turn for home, and if you’ve taken the time to enjoy our stops along the way, the day will be getting long. If it’s not too late, look out for the sign for Cambinata Yabbies, just over 36 kilometres towards Dumbleyung, on your left. Here, in between two small Wheatbelt towns, you’ll find Australia’s first and largest yabbie exporter. These freshwater crustaceans fetch a hefty price in top restaurants all over Asia, and you can buy them fresh out of the water here, as well as have a small tour of the operation. The people at Cambinata will steam the yabbies for you, and if you have a group larger than four, and call ahead, they’ll even arrange a late lunch.

On the way back to Dumbleyung you can take a short diversion south to Kukerin, another of the towns built on the expansion of rail before World War One. It’s located on the eastern edge of the Wilman Noongar territory (you’ve been travelling through Njaki Njaki territory this afternoon). Passing through Dumbleyung, you can see the replica of Donald Campbell’s Bluebird, the boat he used to set the water speed record on Lake Dumbleyung on the last day of 1964. As you head towards Katanning, take a short diversion down Bullock Hills Road and look north-east from any vantage point. You’ll see out over the lake, and take one last look over the Wheatbelt before you turn back to the Great Southern.