The first stage of our adventure takes us south to where the two great arteries meet: road and rail. Before the Great Southern Railway was built: Katanning was an occasional sandalwood cutters camp; Broomehill was a few kilometres west (and called Eticup); Tambellup was part of a pastoral station; and Cranbrook was near a popular sheep-grazing spot called Round Swamp. All these towns that you pass through on the way south, owe their existence to the controversial decision to take the railway inland along the edge of the plains, and not down the Albany Highway. It was a choice that changed the fate of places like Williams, Arthur River and Kojonup forever. The two trails meet at Cranbrook, near the western tip of the Stirling Ranges, which is our destination.

All of the towns along the railway have had their boom times. When wool was in high demand, growing wheat required a small army of labourers, and the gold rush in Coolgardie brought a flood of hopefuls travelling the Holland Track, which started in Broomehill. Signs of a more populous past are everywhere in Broomehill, Tambellup and Cranbrook. Stop and stroll through the quiet morning streets of any of these towns and you’ll be in a living museum where you can feel history instead of just reading about it. If you take a small diversion over the railway line at Tambellup, it’ll be impossible to miss the giant timber tank stand on the main street that remains from the steam rail era. Then, before you continue south, cross back over the highway and drive a few blocks west, past the bright purple church, to the weir on the Gordon River, where you can see some of the abundant birdlife that inhabits the rivers and lakes of this area. It is a particularly beautiful spot in the early mornings and a perfect place to pause and prepare for a day in the Stirling Ranges. In Cranbrook, you can see the first brick house that was built in the town after it was gazetted in 1889. The old station master’s residence is now a museum that is open by appointment if you call ahead. The Cranbrook Hotel is another example of the beautifully restored old pubs in the region and sits on a quiet street, lined with buildings from the turn of last century.

If the day is clear, they might first appear over the horizon somewhere south of Broomehill, or perhaps reflected in the lakes north of Cranbrook: the pastel blue of the Stirling Ranges rising from the plains. At Cranbrook, we turn east along Salt River Road, and then the great spine of these ranges looms in the windscreen. as you skirt the northern edge of the Stirling Range National Park and commence one of Western Australia’s great drives.

What Matthew Flinders first named Mount Rugged and the Goreng Noongars called Koi Kyenunu-ruff (“mist moving around mountains”) aren’t strictly mountains. They weren’t pushed up by volcanic action or the collision of continents. What you see around you was once buried deep in the earth’s crust and became gradually exposed through aeons of erosion. The Stirlings are part of an ancient river delta. You are traversing one of the geologically oldest places on earth.

On your right you’ll have the thick scrub of the national park: one of the world’s biodiversity hotspots and home to over 1500 species of plant, eighty of which can be found nowhere else in the world. On your left, you’ll have farmland that was first roamed by squatters and grazers in the 1840s and settled once the railway came through. The park owes its preservation to high concentrations of fluoroacetates (the same chemical used in 1080 pesticide) in the poison peas, among other plants, in the area. This spared it the effects of grazing until the national park was reserved, in 1913.

25 kilometres east of Cranbrook we take a turn south, to Red Gum Pass Road and onto the gravel. The roads for the next 61 kilometres are safe for two-wheel-drive cars but should be respected – slow down, especially on the corners, and take your time.

If you don’t want to drive off the tarmac or get those red-brown streaks down the side of your car that tells people you’ve been somewhere a little interesting, stay on Salt River Road until it hits Formby Road South.

You can meet up with Chester Pass Road, and the rest of our journey that way. If you stay on the tarmac, have a look at the Mount Trio Bush Camp, and perhaps take a stroll along the Mabinup Creek trail that can be accessed from here.

If you’ve chosen gravel and a dirty car, your first opportunity for a rest stop is a serene little picnic area among the tall trees at Red Gum Springs. Here or White Gum Flat are ideal places to stop, stretch your legs and take in the sounds of the bush.

10 kilometres on the gravel of Red Gum Pass Road and we take a left turn and head east on Stirling Range Drive. The road climbs steeply to the Western Lookout, which gives grand views of the western chain from Baby Barnett Hill, sweeping across six summits to Mondurup Peak. The Central Lookout should be your next stop, with views across the valley to the granite domes of the Porongurup Range – 40 kilometres away but millions of years younger.

Stirling Range Drive joins Chester Pass Road, which divides the two parts of the ranges. As we make a left and head north-east, we leave the western chain, and you’ll see the eastern ridges to your right as we head to Bluff Knoll. Bular Mial (“many eyes”) is the highest peak in the ranges at 1095m and the second highest peak in Western Australia. Even if the strenuous 4-hour-return climb isn’t part of your plan, it’s worth driving to the carpark at Bluff Knoll to take in the views of the farmland to the north and see, in one glance, all but the very northern-most part of your journey today. 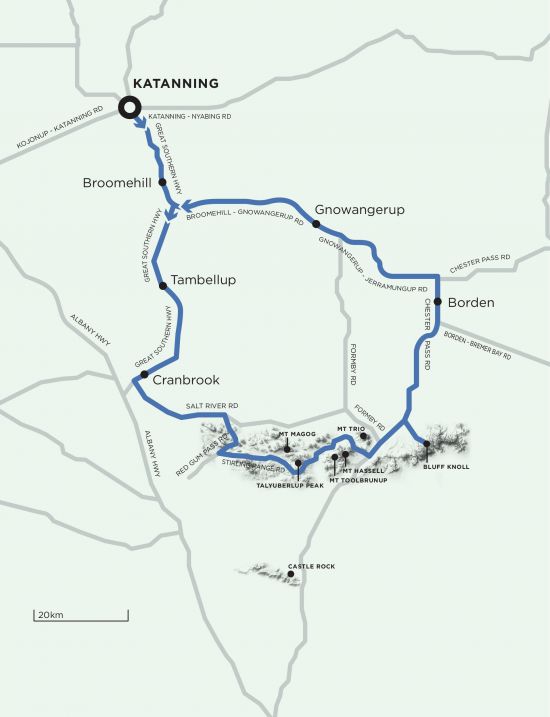 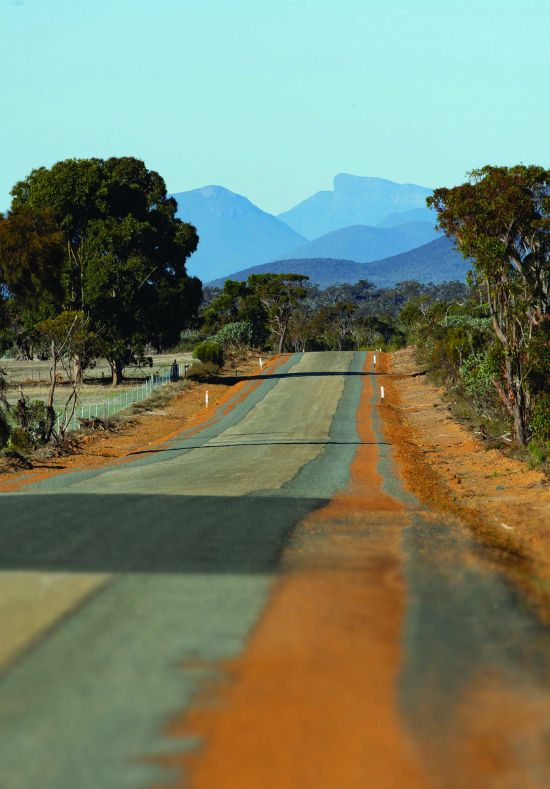 Continuing north-east on Chester Pass Road you’ll pass the Stirling Range Retreat, which has resident volunteers from Birds Australia leading daily walks in September and October. Guided nature walks can also be arranged at other times of the year on request.

Further north, towards Borden, you’ll spy the incongruous sight of an authentic 16th-century design, five-stories high, 22-ton, brick “ground-sail” Dutch Windmill. The Lily Windmill is one of the largest traditional windmills ever built in Australia and the only operational flour-producing windmill on mainland Australia. This is a good spot to stop and take a look at the full breadth of the mountain range.

Borden is the next town on Chester Pass Road, close to Paper Collar Creek, where sandalwood cutters in the 1840s would meet before heading to Albany. Legend has it that they cut strips of paperbark to make the stiff shirt collars that were the fashion of the day, before heading out for a night on the town.

The last town you’ll pass through before rejoining the Great Southern Highway at Broomehill, is Gnowangerup, named after the gnow, or malleefowl, that were abundant in the area at the time of settlement. A walk around Gnowangerup in the late afternoon light will reveal some beautiful federation-era buildings, an outdoor farm machinery museum and, to give your day’s journey some final perspective, the Noongar Cultural Heritage Centre and “keeping place”. You’ve been traversing the country of the people of the plains, the Goreng Noongars, and this building contains some simple yet evocative displays that collect the stories of the elders from the region. On your left, as you leave Gnowangerup, you may catch a last glimpse of the Stirlings across the farmland in the afternoon light, on your way home.