Look east from the Premier Mill Hotel, down Clive Street, across the valley of the town, and you can see, on the distant ridge, the last stand of jarrah trees of the South-West forests. This is the beginning of the great plains of the interior of Australia, and today’s trail will pass from the edge of the jarrah, through the southern Wheatbelt and the Mallee, and back again.

But first we travel south, to Katanning’s nearest neighbour, Broomehill, to learn about the beginning of a famous Australian outback journey.

In 1892, just four years after the completion of the Great Southern Railway, word spread of a gold find in Coolgardie. The streets of Albany, Perth and Fremantle were suddenly crowded with miners, merchants, and the rest of the fortune seekers that follow a gold rush. Many of these ‘t’othersiders’, as they were called, rode the rail through Broomehill and Katanning on their way to Beverly and York before beginning the long trek east to Coolgardie. The entrepreneurially minded at every stop along this route could see what a financial boom a shortcut to the goldfields from their town could create – hundreds of paying customers stepping off, needing food and supplies. Several attempts to open a route through the interior failed. A prospector named McIntosh who set out from Katanning in 1892 was never seen again. It was sparse, dry country that even the Aboriginal people travelled infrequently.

John Holland was a local sandalwood cutter and kangaroo shooter, and an experienced bushman. He formed a team with brothers Rudolph and David Krakouer, as well as a young John Carmody, and with the backing of local merchants such as Henry Jones, set off in April 1893 following a party held at the local hall in their honour.

Their plan was not just to find a way, but to cut a trail suitable for horse and cart to travel. Which, remarkably, they did, finding and building a track over 500 kilometres long in eight weeks. They reached Coolgardie the day after Paddy Hannan found gold in nearby Kalgoorlie on June 17.

Broomehill boomed as miners passed through to begin the two-week journey along the Holland Track. Three years later it was all over though, as the rail link from Northam to Coolgardie was completed. Although the Holland Track was later used in the 1920s to help open up the wheat-growing towns of Pingrup, Lake Biddy and Newdegate, it gradually fell into disuse.

Well-prepared off-road enthusiasts have kept the track going in the modern era though, and in Broomehill you can see the spot where Holland, the Krakouers and Carmody set off. You can take a short walk along the track if you want to stretch your legs. The restored Henry Jones building is in town and you can learn more of that era in the Broomehill Museum.

We then head west to the town of Gnowangerup. It’s the beginning of the mallee country that the Goreng Noongars knew as the ‘place that the mallee hen nests’. The area was opened up for sheep herding then wheat production in the early 1900s, and close to town you can see one of the original homesteads for the region. There is a heritage trail to follow around town if you are interested in seeing Gnowangerup’s heritage-listed buildings, as well as an open-air farm machinery museum and Noongar heritage museum, housed in one of the town’s oldest buildings.

As you travel further east, through Gnowangerup to Ongerup, you’ll notice the salmon gums, their trunks ranging from coppery red to pink and orange. In the mornings and late afternoons, their distinctive acropetal shape and bright colouring forms a striking image against the blue of the Stirling Ranges to the south.

In Ongerup, a must-see is the Yongergnow Australian Malleefowl Centre. Dedicated to the preservation of the Mallee country, the centre is one of the only opportunities to see this striking-looking but now endangered bird and the unique nests that serve as an incubator for their eggs. Ongerup also has some interesting street art and a museum. The museum hosts a stunning display during wildflower season.

Our trail now turns north, away from the higher rainfall of the south and into the more arid interior. The road to Pingrup crosses a low-lying plain and passes several lakes, and near the Cairlocup and Corneecup nature reserves. This is big-sky country now and the vastness of the Australian continent starts to show itself as, even on the slightest rise, you’ll see for miles and start to feel very small.

Once in Pingrup, our trail turns back west towards Nyabing, but if you take a small diversion north along the road towards Lake Grace, you can see the Chinocup lake system, famous for their pink colour caused by the salt-loving halobacteria, which produce a red pigment.

In Pingrup you can get some sense of the peak of the wool industry, which was the catalyst for the settlement of much of the Great Southern. You can’t miss what the locals call the ‘Shears Shed’, with its giant shearing handpiece on the roof. What was once a grain bin had been repurposed into a small indoor stadium that held shearing competitions until the year 2000. Although not a relic of settlement times, its emptiness strongly evokes the heyday of a now-declined industry. 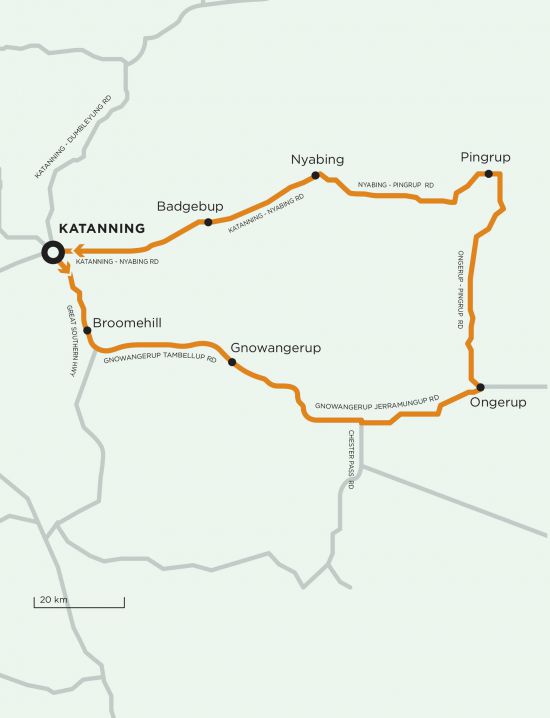 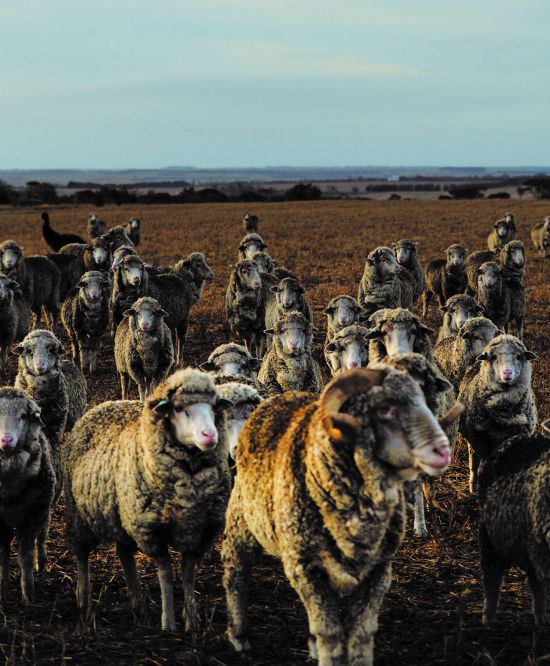 We head south-west through the southern end of the Chinocup lake system and the Willoughby nature reserve before swinging west towards Nyabing, through the vast crops of the southern Wheatbelt. This is farming on a massive scale. In early winter or early summer, you might be lucky enough to see some of the mammoth headers and seeders that are now used to cultivate this semi-arid land.

About nine kilometres east of Nyabing you’ll meet the Holland Track again, as it crosses the Nyabing-Pingrup Road near Gnowanalup Gully. Take a moment to think about the kilometres you’ve covered today to meet this track again, and realise that John Holland and his team were only one-eighth of the way to Coolgardie, making their own road as they went.

In Nyabing you can see a modern example of a community that just gets on with it too. The Nyabing Community Centre and pub is being constructed through the proceeds of a community cropping initiative in which local farmers donate land, plus their labour and machinery, twice per year, to produce a crop which is sold to raise funds for this very important part of country life. Life in the bush relies on this collective spirit and, as primary production has become less labour-intensive over the years, the little communities have suffered. But towns like Nyabing refuse to go down without a fight.

On the road back to Katanning, if you blink you might miss the small locality of Badgebup, which has fallen to the depopulation of the bush. A local family, the Warrens, settled the area in 1897 and lost their son, John Campbell Warren, in the Great War. Stone from a quarry on their property was used to build St Peter’s Church in 1922, which you can see just north of the road after you cross the railway line.

If you are looking for a place to finish the day before the short drive back into Katanning; to stand somewhere quiet and think about the collective courage and community spirit of the people who came out here to make their life on this land; then this beautiful stone church, surrounded by nothing by mallee scrub and farmland, would be the perfect place to do it.