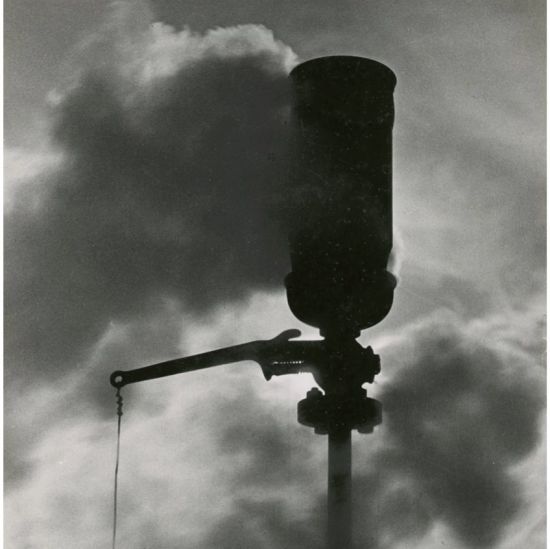 For generations the rhythm & routine of daily life in Katanning was controlled not by televisions or smartphones, but by the simple blast of the Mill whistle. For countless thousands of Mill workers, it marked the start and end of the working day and signalled any breaks in between.

Katanning also benefited from the whistle as it provided a much-needed service of standardising time across the community. Many watches and clocks were set to its schedule and even remote farmers could rely on the powerful blast to carry for miles. Any changes led to letters of complaint making their way in to the local newspaper with accusations of domestic arrangements thrown into disarray.

The whistle’s importance went beyond just providing a daily routine and it was often called into service for community announcements. The whistle made sure people got out of the beds for holidays as well as for work, in particular so they didn’t miss the train for ‘Katanning Days at Albany”. Workers were assisted with an annual beach holiday through discounted travel & accommodation, and a few blasts of the whistle.

A less regular celebration occurred around 10:30pm on the 11th November 1918 when the whistle was blown to signal the signing of the World War I armistice. The “preconcerted signal’, which caused people to flock to the Mill to celebrate, some in ‘varying stages of dress as overcoats and cloaks were hastily thrown over night gowns’.

The whistle was then blown on all future Armistice days, at 11am and again 2 minutes later, to end the moments silence. This didn’t always go to plan as one year, shortly after hearing the 11:02 whistle, a department store worker phoned his office complaining that the lunchtime bell had gone and no one had been sent to relieve him.

It also helped the town in times of distress as well as celebration. One morning in September 1902, the town was woken earlier than normal, when the whistle ‘began uttering some very extraordinary noises, and to those accustomed to this place, that is an indication that something is wrong’. It was being blown to call people to search for a lost 5-year-old boy. Despite dozens of people looking for him, he wasn’t found until the next morning, when he informed his rescuers that he became lost when he wandered too far afield when picking wild flowers.

More immediate danger was averted on numerous occasions when the whistle called people to help fight fires raging in nearby businesses and workshops.

While the whistle was a reliable friend to the townsfolk, this view was not always shared by their four-legged friends. In 1917, farmer George Coates was at the Mill unloading his wagon of wheat when his five-horse team were startled by a blast of the whistle. They bolted down Clive Street as Coates hung on to their trailing reins. After a couple of hundred yards they attempted to turn a corner, crashed through a wire fence and were only stopped by a fortunately placed tree. Coates only made it to the fence, where he flew over the front of the wagon and remarkably walked away unharmed but more than a little dusty.

The team’s Clive street dash startled another horse and cart, which took after the first and capsized in the exact same manner.

One horse more familiar with the whistle was the faithful team mate of Mill worker Bill Rafferty. For 35 years Bill delivered mill produce by horse drawn carriage, and when he retired in 1947 so too did his loyal horse. After a party of toasts and praise, Bill left the Mill for a final time when, in the presence of all, he formally mounted to one of the easy chairs which had been placed in the driver’s seat and drove off amid cheers, trotted out of the Mill yard on his way to his new home, to the accompaniment of blasts from the mill whistle.

Almost to a resident, Katanning has welcomed back the old mill whistle in place of a temporary siren. It is doubtful if any other thing in the town has ever been so heartily disliked as was that siren

It also proved a send-off for the whistle itself. A few months later the Mill’s power changed from steam to electric and some bright spark decided to retire the much-loved whistle in favour of a modern electric siren.

The reaction amongst locals was laid bare in the Great Southern Herald when they reported that described "It is doubtful if any other thing in the town has been so heartily disliked".

Compromises were made, and with the help of some compressed air the whistle came out of retirement to continue to guide the town.

Then in 1960, the SEC took over the electricity supply at Katanning and to "keep up with the modern times" the old whistle was removed again!

When Oat Milling Company started milling operations in 1970 popular demand had them hunting down the missing whistle. It was eventually found in the care of an old Katanning'ite Herb Wanke who was in retirement in Albany. Herb was happy to repatriate the much-loved icon. Back on the roof it went and it whistled for another 11 years until the closure of OMC in 1981.

The Premier Mill Hotel has since acquired the 'Old Mill Whistle' and intend to return it to it's rightful place atop the Premier Mill. The whistle will sound every day to mark the stroke of midday ensuring the tradition of the mill whistle, lives on in the township of Katanning. 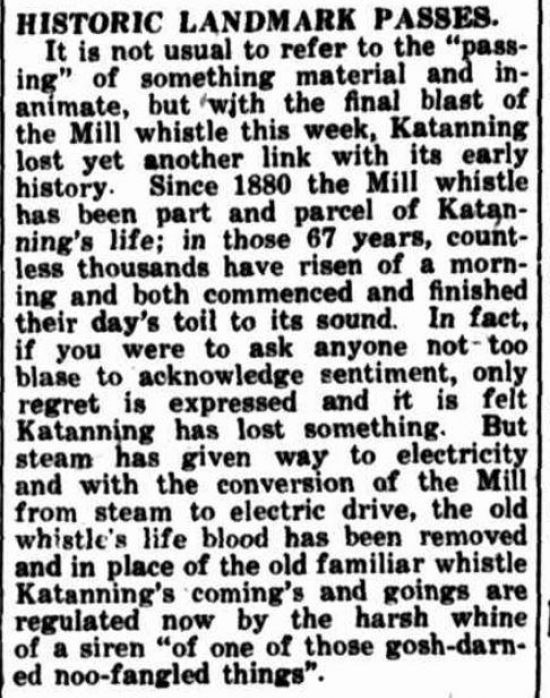