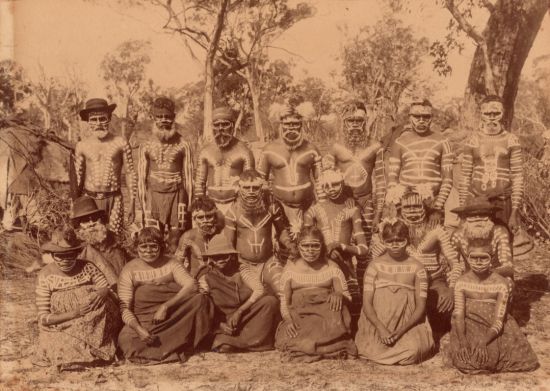 With a century of hindsight, it seems odd that the first permanent properties of the Katanning District – Yowangup, Coompatine and Indinup – should all adopt the Aboriginal names for the water sources at their centre. The pioneers intended no irony, and were probably right in thinking that the nomadic lives of the Aborigines would be largely unaffected by their presence. But they must have realised that a great wave of agricultural settlement would be disastrous for the original inhabitants.

Although cruelty and violence lay ahead, early dealings between black and white were characterised by a mix of incomprehension and respect. The first white settlers observed extraordinary hunting and tracking skills, and recognised the native’s intimate knowledge of land and season. But the newcomers, focused on their own engagement with the land, displayed little anthropological interest. They knew nothing of Aboriginal culture: the beliefs, social structure and rules of intermarriage that had evolved over thousands of years.

Importantly, because Aboriginal people ranged widely, practising neither agriculture nor animal husbandry, the new settlers failed to recognise any pre-existing claim to the land.
To the European mind, the land was unoccupied.

In reality, the whole of the south-west of Western Australia was occupied, and had been for a very long time. It was home to the Noongar, an Aboriginal ‘nation’ with at least fourteen distinct language groups. Noongar boodja (country) extended north beyond Jurien Bay on the western coast, east beyond Esperance on the southern coast, and included almost all land south of a line joining the two.

The Katanning district was unusual, being at the junction of three traditional Noongar domains. The lands to the north, including present-day Wagin and Dumbleyung districts, were home to the Wilmen language group. The lands to the west and south, including Kojonup and Cranbrook, were home to the Kaneang. Similarly, the Koreng ranged south and east to Gnowangerup, the Stirling Ranges, Bremer Bay and beyond.

These traditional territories were characterised not by hard boundaries but by overlapping ranges and crossing paths. For the most part the different groups coexisted peacefully, even interacting socially in seasons of plenty. Their dialects were distinct, but a common core of language made for easy communication. A quick glance at any modern map of the Great Southern reveals one important difference of Noongar dialect. From Katanning to the north, Aboriginal placenames typically ended in –in or –ing, which was the Wilmen suffix denoting ‘place of’. In this direction we find Moojebing, Woodanilling, Nairibin, and Nyabing. For both the Kaneang and Koreng the corresponding suffix was –up. Thus to the south-west of Katanning we find Kaneang names Kojonup, Jungalup and Muradup. To the south-east we see places once home to Koreng: Tambellup, Gnowangerup, Ongerup and Jerramungup.

A curious consequence of this difference is that in the shared lands around Katanning, many places carried two near-identical names: one ending in –up, the other in –ing. For one visiting group, a place might be “Dyliabing”; to the next, it might be “Dyliabup”. Katanning itself was subject of this variation. Daisy Bates, in her ethnological writings, noted four variations: Ke’-taning, Ke’-tanup, Ke’tungain, and Ke’tungup.

It should be noted that all of these placenames are English-language approximations of Aboriginal spoken words. The first white settlers found the rapid staccato of Aboriginal speech difficult to hear, and quickly learned that some Aboriginal sounds have no exact counterparts in English. Inevitably, phonetic spellings vary widely.

Many Noongar names identify watering places. Water was precious and every lake, creek, pool, soak or seep had a name. Even rock-holes or gnamma were important destinations in dry times. Natural watering places were also natural meeting places. Lake Toolbrunup was a gathering place for Koreng in the summer months. Similar significance attached to the pools of the Gordon River and the gnamma holes west of Tambellup. Importantly, Aboriginal people spoke of belonging to these places, rather than of owning or controlling them.

The Noongar population before white settlement is not precisely known. Estimates vary from as few as 6,000 to “several tens of thousands”. In about 1860, about thirty years after first contact but before any large-scale agricultural settlement, the populations of Kaneang and Koreng were estimated to be about 500 each. Whatever the exact figures, the next fifty years were to prove catastrophic. By 1911, when Daisy Bates came to Katanning to study the Aboriginal people at a reserve near Police Pools, only a dislocated remnant population remained. Traditional affiliations, she observed, had all but disappeared.

At the camp near Katanning there were natives from Eucla, Balladonia, Mt Stirling, Mt Ragged and many other places far south and east and north-east of Katanning.

Particular susceptibility to European diseases was the single greatest factor in the collapse of the black population. Bates reported that during her time at Police Pools, about 80% of camp residents contracted measles. Although they received regular visits and treatment from Katanning’s Dr House, the toll was heavy.

By 1915, under different government policy, things had become a great deal worse for the Noongar. According to one estimate, about fifteen per cent of those living in and around Perth were relocated and effectively interned at the Moore River Aboriginal Settlement. At about the same time, there was a similar mustering of Katanning-district survivors for compulsory resettlement at Carrolup, some twenty miles west of the town. In the broader Western Australian community there was little talk of dispossession. The prevailing view was that the demise of the Aboriginal race was inevitable, and that white responsibility extended only to government-sponsored palliative care. By any economic measure, the settlement of the Great Southern was an outstanding success. For the Noongar, however, the appropriation of lands in the second half of the nineteenth century was nothing short of humanitarian disaster. Indeed, sadder circumstances are difficult to imagine. But time has passed and times have changed. Noongar culture has survived to be celebrated, and the opinions of white Australia have shifted. The pre-existing claim is now enshrined in national law, and further good may flow from shared reflection.